We woke at what we believed to be 7 a.m. (actually 6 a.m.). The sun was already coming up as we enjoyed a good breakfast and then headed to find the Bright Angel trailhead. We had incorrectly believed it was behind the visitor’s center. It is not, but this was quickly remedied when we took one of the free, continually operating shuttle buses across the park to the trailhead. The bus driver was informative for all five passengers (we took the 8 a.m. bus, so there were few riders). He told us about the grocery store, deli and restaurants as he made stops at each. Finally, we reached our destination. After taking a few pictures, we began our descent on the trail. We had plenty of water and my husband was sure we could make it to the first rest station that included a water bottle filling station and a bathroom. We saw people of all ages coming out of the giant canyon, huffing and resting on ledges, drinking water and looking at landmarks to determine how far they had to go before they reached the top. After seeing so many groups, I became aware that our drop into the abyss would be followed by the much longer journey out.

The rock on this trail defies expectation. Of course, this is the Grand Canyon and it’s comprised of millions of years of rock layers. But knowledge cannot substitute for experiencing the rock from the ground looking up. The white powder soon becomes a thick, red cloud that gets on everything it finds. Sunscreen slathered bodies are caked in red and it is a sign of honor that you’ve made it down to that first level of red rock. You will need a shower once the hike is over. 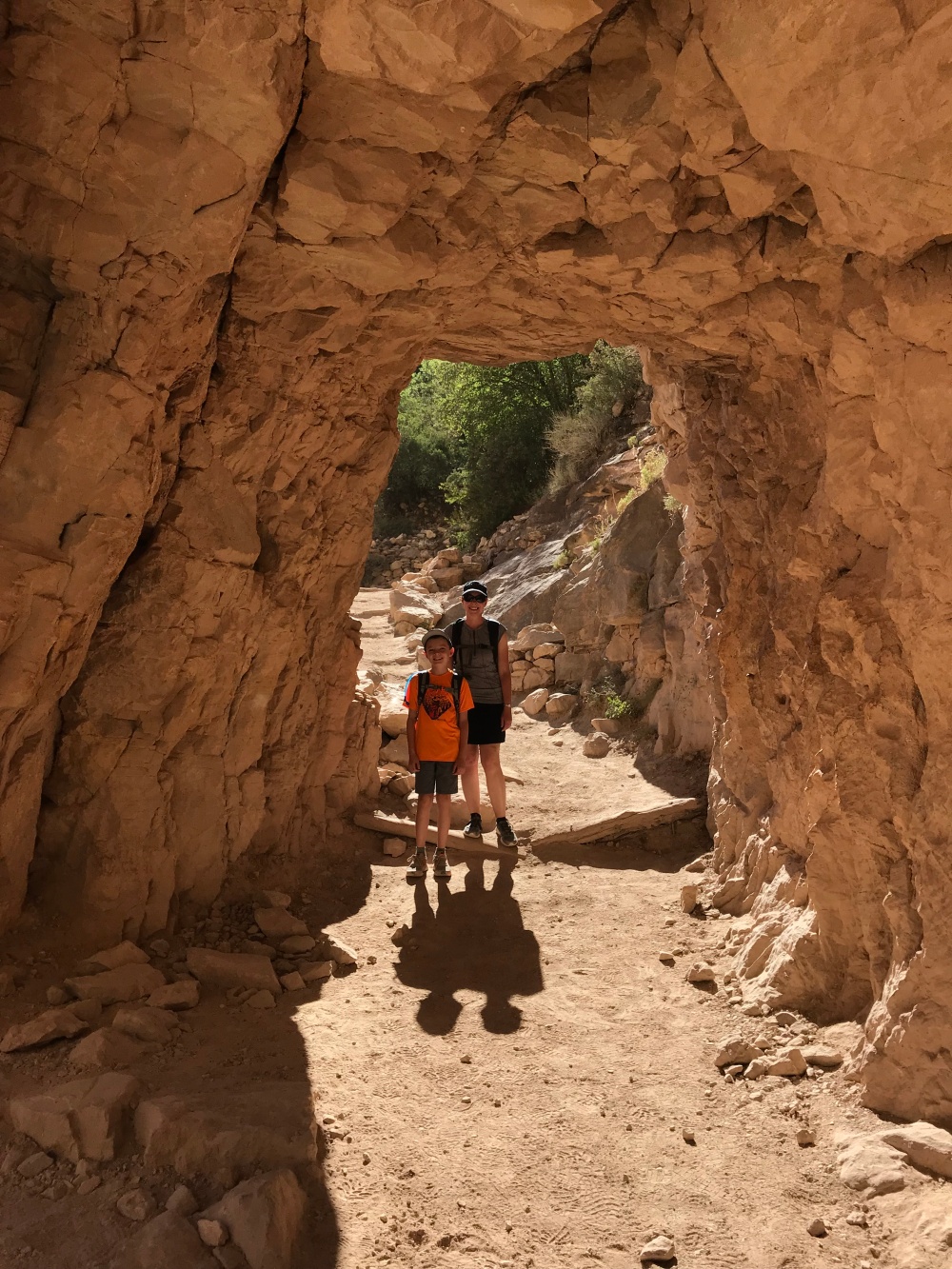 We made it to the 1.5 mile rest area, or the first stop on the 9 mile trek to the bottom. This doesn’t sound like much to anyone who hasn’t tried hiking in the canyon. I walk much more than this in my everyday life. But this particular route was different. We took our time coming up. It is much warmer in the canyon than on the rim, which was apparent when we made it up to the white rock area again and were greeted with a strong breeze. The people on the rim looked like ants waiting to fall to their doom as they strained to see over the edge of cliffs.

Once we made it back to the top of the rim, we took the bus back to the deli for lunch. They serve a variety of deli sandwiches, salads, and pizza. And of course, they have ice cream. Caked in red clay powder, we headed to the car and drove to the campground’s camper services center to shower. An employee works at the showers and laundry and was very welcoming. During the time we were there, I heard him welcome every person who entered the building and chat about their day. He was also accommodating when people needed to get change for the showers which are $2 for 8 minutes.

Feeling revived, we returned to the campground to relax (or play frisbee), make dinner, and discuss our plans for the next day. We decided to rent bikes and ride on Hermit’s Road to Hermit’s Rest, an area in the South Rim of the park.  After dinner, we walked along the Trail of Time, a trail leading from Yavapai Point and Geology Museum down to Verkamp’s Visitor Center. This trail follows the rim and includes rock exhibits depicting how and when the different layers of rock formed. It also provided a lovely view of the sunset.

We had a relaxed breakfast and headed to the bike rental store at the visitors center. Being the only people at the bike rental location that morning, we obtained our bikes and were on our way within 15 minutes. We rode down the trail (primarily downhill) to the bus transit station. The ride is a quick 2 miles.

Hermit Road is closed to private vehicles March through October, making it ideal for bike riders and hikers. Bus service from the Hermits Rest Route Transfer is available for all visitors and buses stop at each overlook on this route. We rode the bus to Mohave Point, which avoids the 6 degree grade uphill to get to this location. We decided this was a good idea if we wanted our son (and therefore ourselves) to enjoy the day riding bikes. The road is paved and meanders quietly through the scenic area, easily accessing each overlook. It diverges from the road near Monument Creek Vista, where the road travels further inland and the trail nudges the edge of the canyon. We saw only eight people and one bike group the entire ride. We enjoyed sandwiches and stopped to admire the view as we slowly took our time riding to Hermit’s Rest. Once there, it was another round of ice cream and more water.

We rode the bus from Hermit’s Rest to Hopi Point, then exited to ride our bikes downhill toward the bus transfer station. We stopped to admire the views at each overlook, despite the warmer temperatures. At the Trailview Overlook, one can see much of the Bright Angel Trail. If I would have seen this view before hiking the Bright Angel Trail, I might have thought twice about the hike.

The steep downhill grade on the ride from Hopi Point was fun and made the return trip to the bus station very simple. We took the bus to the campground, then rode bikes back to our site to enjoy biking around the campsite and campground. Our family agreed that this was one of the best things to do at the Grand Canyon. Bike paths link the prominent South Rim spots, so it’s not necessary to drive to any of these locations. Next time, we will bring our own bikes to the Grand Canyon.

After riding on the path behind the campsite to return the bikes, we went through the visitor’s center again to obtain the coveted Junior Ranger badge, and then to the book store. Our trip was not complete without purchasing a few souvenirs and wishing we had another few days to stay at our favorite campsite of the vacation. 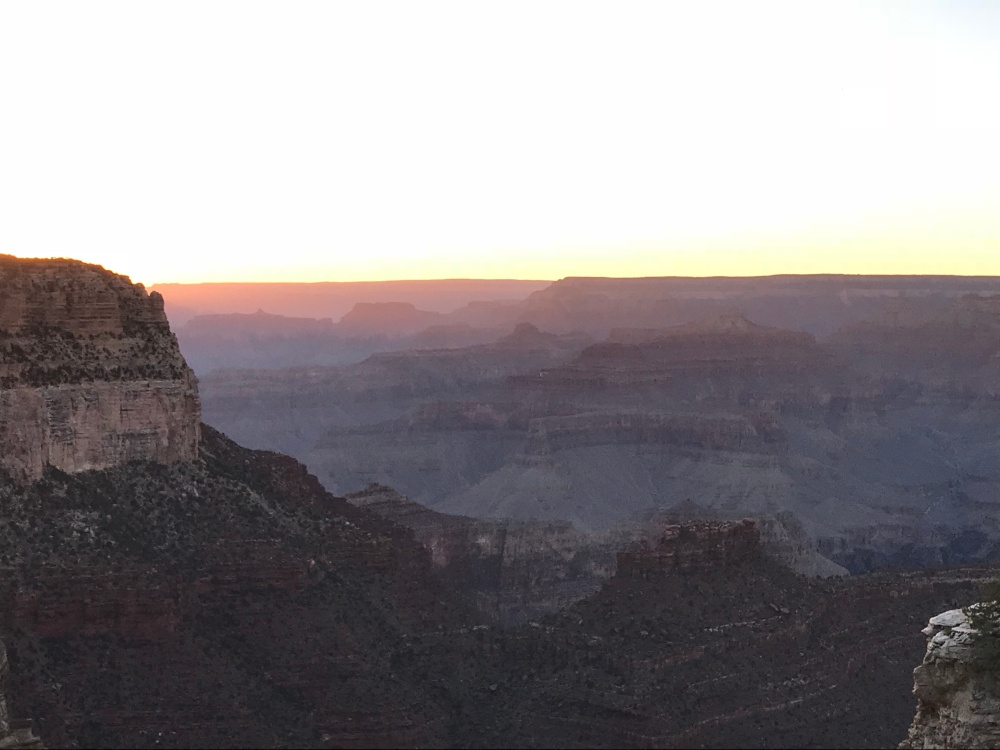