The Grand Canyon is a study in paradox. Looking across the vast canyon from the rim, one sees an open cavity of colorful, layered rock. The appearance at sunrise or sunset is even more concrete; the rays of sun create a haze that seems to feature single fingers on a minute-by-minute reel of astounding proportion. On closer observation, the desert-like canyon is actually teaming with life, providing no fewer than six diverse climates that support their own animals and plants. The bustling visitors center, a hub of life during the day and evening hours, stands in contrast to the peaceful trails and open campsites that beckon. Each year, the Grand Canyon is visited by more than 6 million visitors from around the world. The number of people making their way down the Bright Angel Trail or walking up the stairs of the Desert View Watchtower may deter people searching for quiet beauty from traveling here. However, the immense canyon dwarfs all of these concerns and welcomes visitors to explore geology, habitats, and seclusion.

Our family had never traveled to the Grand Canyon, mainly because the number of visitors per year was daunting. In general, people don’t want to travel to a beautiful location only to be bombarded with long lines, pushy people, and a lot of hot weather. Most people reading this post have probably traveled to the Grand Canyon. Words cannot adequately describe the views. Plenty of famous photographers, artists, poets and writers have described their love for the place (and with good reason). While standing on the rim was the most simple and rewarding experience of our entire journey, there were so many things that I did not see in photos or read in other travel guides or blogs. These are the things that made our Grand Canyon visit continually surprising and restful.

We arrived at the East entrance (Desert View) in the afternoon. I’m not really sure what time we got there because our phones updated at different times, while our navigation (Google maps) did not update until we left the park completely. We believed we had arrived at 2 p.m. after traveling through Four Corners and taking the obligatory (yet somewhat pricey entry fee of $5/person) detour for our photograph in all four states at the same time. I also purchased some items at the open air market that surrounds the entire Four Corners monument and I am glad I did. Buying a horse hair vase made by the man who sold it to me was a treat, especially at the bargain price of $20.

As we drove toward the East entrance, the landscape changed from open desert to juniper and yucca.  The ranger told us that we may have difficulties parking except in the visitor’s center at the east entrance. We were one of five large vehicles parked in the extensive lot at the visitor’s center and made our way past the stores, café, and outbuildings, to the Desert View Watchtower. Designed by Mary Colter, the tower was immediately recognizable as a modern version of a kiva. All the culture we absorbed from Mesa Verde would definitely be used here as we recognized the native influence in several areas of the park. We enjoyed the views without walking out on unassuming ledges. The National Park Service makes it clear where people should stay, and for good reason. There are more than 15 fault lines running across this park. Anyone who has walked down a trail into the canyon and looked up at the rugged rock walls is aware that every rock appears to be balanced on the one below it, with cuts and crevices throughout. The canyon is not as stable as it seems on the rim. 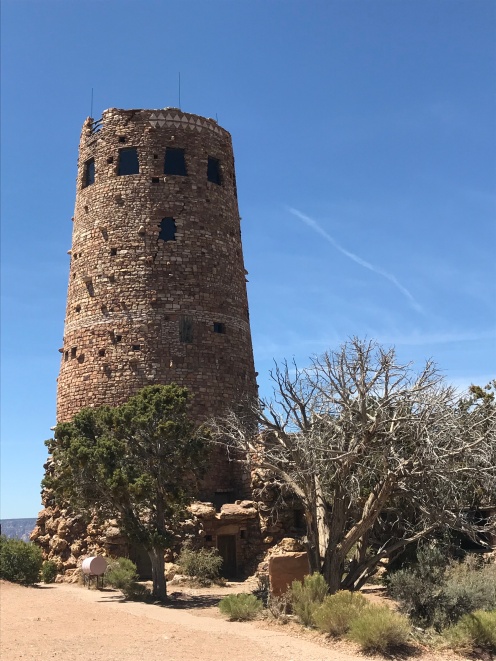 We loved the architecture and connection with the past at the tower. Since it was getting warmer, my son requested the first of many ice creams. Not wanting to disappoint, we went to the ice cream and coffee shop located near the tower. We purchased the ice cream in the National Parks hat. At first, we thought this was a somewhat silly, yet fun souvenir. As it turns out, the added few dollars was a great deal. If we took the hat to other similar ice cream places in the park (to the deli on the south rim), they would fill it for free! This made the hat the best deal in the park for ice cream lovers.

We then drove south on the rim and decided to stop at every overlook that had available parking. Amazingly, there was little traffic and each overlook had only a handful of cars. We found parking the camper very easy at each of these spots. We also stopped at the Tusayan Museum and Ruins, which had a simple walking trail and museum center.

Driving toward the South Rim, the landscape began changing. We turned a corner and towering pine forests took over the landscape. There was road construction as we got closer to the visitors center which added to the maze of roads looping the bustling South Rim.  Weaving through road construction cones, we found the check-in location for Mather Campground.

Mather Campground is a 300+ site campground without hookups. They have a dump station and camper services center with showers and a large laundry room near the check-in. I selected this location because many of the sites are very large. There is a loop that does not allow generators and others that allow them for two hours in the morning and two in the evening. We checked into our site 156 without a line. By this time, we thought it was after 5 p.m. but later discovered it was actually after 4 p.m. A quick drive down the narrow, paved loop brought us to our favorite campsite.

The site is a fairly level paved pull-through situated in a grove of pine and juniper trees. Our site was approximately one third acre. A fire ring and concrete picnic table completed the location. At the back of this site was a paved bike trail and, further out, was a road. I could have stayed at this campsite for at least a week without getting tired of the view or the quiet.